September is a fabulous time of year in Daintree - warm, sunny, not humid and very few mosquitoes. With a couple of notable exceptions (Buff-breasted Paradise Kingfisher and Black Bittern), all our summer migrants are here. Lots of nesting is going on making some birds like Great-billed Heron and Southern Cassowary more difficult to see, and others like Metallic Starling and Brown-backed Honeyeater are easier.

Good sightings of Little Kingfisher, Double-eyed Fig-Parrot and Pacific Baza in the garden at Red Mill House while Stewart Creek Rd has been handy for Lovely Fairy-Wren and Pied Monarch.

Very good sightings of Noisy Pitta on the track at the end of Cape Kimberly and there has been a very handsome, and somewhat 'friendly' sub-adult Southern Cassowary at Jindalba Boardwalk, as the following photos from Paul McLelland shows us.


A male Cassowary with three chicks is also in the region of Jindalba, and also a large female. Most sightings seem have been early morning and it is has been difficult finding then during the day.

For the 3rd year in a row the Red Mill House team has organised and run the Australian Birdwatching display at the British Birdfair. A three-day event with over 23,000 people coming through, it is the biggest event of it's type in the world. With 7 display marques, plus three different lecture marques, optics, camera gear, travel companies, conservation groups etc, etc it is a fabulous weekend.
Being the first fine weekend for (seemingly) months, people were out in throngs and everyone had a great time. The mood was upbeat, being just after the very successful London Olympics

30 birdwatching-related businesses from around Australia were represented at the booth, with lots of requests for tours, guides and accommodation throughout Australia. Unfortunately the continually high Australian dollar has made it difficult attracting the Brits to Australia in the last few years, but it seems they are getting used to the idea and are now talking about visiting anyway. That is a big improvement on last year.

It is non-stop talking for 3 days, but lots of fun.
Posted by Trish and Andrew at 5:27 PM No comments: 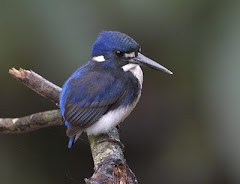 Red Mill House in Daintree - Home away from Home for birders (and non-birders) visiting Daintree. 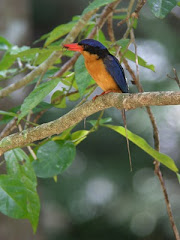